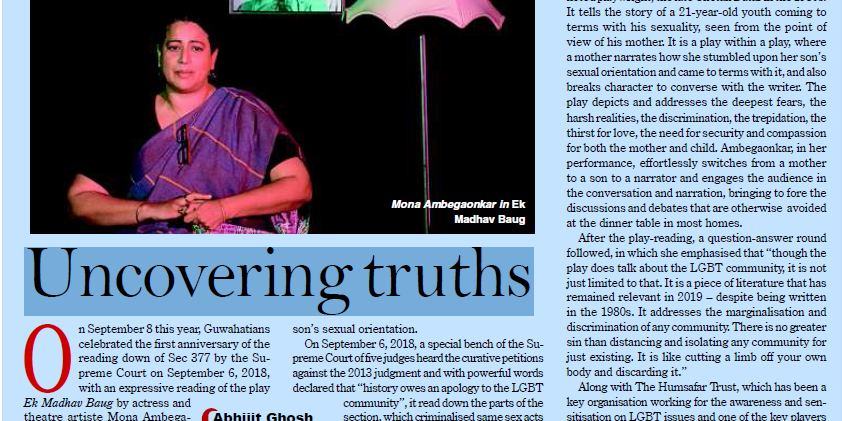 The following article was written by Abhijit Ghosh, IDeA – Development Associate and published in The Assam Tribune on 17th September 2019.

On September 8 this year, Guwahatians celebrated the first anniversary of the reading down of Sec 377 by the Supreme Court on September 6, 2018, with an expressive reading of the play Ek Madhav Baug by actress and theater artiste Mona Ambegaonkar at a city hotel. Hosted by the ant, an NGO based in Chirang district, more than 100 people registered for the event, from all walks of life, to witness the magic and grace of Mona Ambegaonkar’s performance as a narrator and mother who tries to come to terms with her son’s sexual orientation. 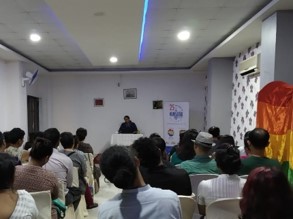 On September 6, 2018, a special bench of the Supreme Court of five judges heard the curative petitions against the 2013 judgment and with powerful words declared that “history owes an apology to the LGBT community”, it read down the parts of the section, which criminalised same sex acts between consenting adults, and restored the faith of the community. To celebrate the first anniversary of the reading of the judgment, IDeA, an initiative of the ant to promote a stronger alternate and voluntary sector voice in the North-East, organised a play-reading by Mona Ambegaonkar in association with The Humsafar Trust (Mumbai). She has been a familiar face in Indian films and television for decades, and is remembered for portraying the character of Dr Anjalika Deshmukh on the hit Indian TV serial CID. Ek Madhav Baug is a poignant play written by noted playwright, the late Chetan Datar in the 1980s. It tells the story of a 21-year-old youth coming to terms with his sexuality, seen from the point of view of his mother. It is a play within a play, where a mother narrates how she stumbled upon her son’s sexual orientation and came to terms with it, and also breaks character to converse with the writer. The play depicts and addresses the deepest fears, the harsh realities, the discrimination, the trepidation, the thirst for love, the need for security and compassion for both the mother and child. Ambegaonkar, in her performance, effortlessly switches from a mother to a son to a narrator and engages the audience in the conversation and narration, bringing to fore the discussions and debates that are otherwise avoided at the dinner table in most homes.

After the play-reading, a question-answer round followed, in which she emphasised that “though the play does talk about the LGBT community, it is not just limited to that. It is a piece of literature that has remained relevant in 2019 – despite being written in the 1980s. It addresses the marginalisation and discrimination of any community. There is no greater sin than distancing and isolating any community for just existing. It is like cutting a limb off your own body and discarding it.”
Along with The Humsafar Trust, which has been a key organisation working for the awareness and sensitisation on LGBT issues and one of the key players fighting for the reading down of Sec 377, Ambegaonkar has performed the play across the country since 2010, and has completed over 100 performances. She expressed her interest in taking the play to more parts of the North-East, and other parts of the country as well, to reach wider audiences.