Dr. Sunil Kaul, Founder Trustee who is currently the 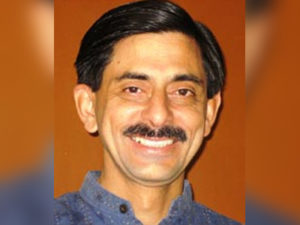 Managing Trustee and also CEO is based in the ant’s campus in Rowmari. A public health doctor who has consulted on malaria, T.B , Maternal and Child Health and other public health issues with national & international agencies; has over 10 years experience in the Army as a medical doctor and associated with Development Sector for over 25 years.

I would best start with an anecdote. Decades ago, as a young doctor with the Army Medical Corps, one of my regular duties while posted in a mountain division was to “provide medical cover” to a helipad whenever a senior officer was to come by chopper. On one of these duties, I was greeted by the fragrance and sight of hundreds of roses of different colours laid out all around the reception room where the Army Commander and his wife were to be treated to coffee before they visited the Cantonment. I was informed that word had got around that the lady loved roses, so a young officer had been sent down in a jeep to Pathankot four hours away and he had chosen these bouquets and baskets of roses seen all around. The chopper got delayed and soon came the first lady of the cantonment to receive the Army Commander’s wife and she was appalled at so many roses being so proudly displayed. “She loves roses more than her life – she hates them cut from the bushes!! So, please hurry up and remove them as soon as possible!”

In other words, the same fact can always have two interpretations, but depending on which lenses you wear, you would see only one. Much like what was said of Dada Kondke’s Marathi film dialogues that were replete with double entendre which had a single risqué meaning for its largely male audience!

This pandemic of novelCorona and responses to it have two sides too. The tragedy is that hardly anyone can know the ‘other’ side. What we hear almost all the time is about a swiftly spreading virus that can spread from any surface to the mouth, eyes and nose and can kill anyone and hence the best way to tackle is to “lockdown” in order to “flatten the curve.” I can scarcely see any other viewpoint while sitting in quarantine in a village where I stay and work.

When I write this, Corona in India has been confirmed in 13835 people and 452 of these have succumbed to the virus. We are seeing the graph rise in bar figures shown daily in all media channels, and we fear that the way it is rising, the ‘s**t may hit the roof’ in another month or so. This ‘Made In China’ virus, as per the narrative in the media, originated in Wuhan and whether it is important for us to know this detail to save the Indian population or not, we also learn that it has been surprisingly and suspiciously contained very swiftly in China and in friendly Russia and North Korea too. The ‘communist’ virus has then gone ahead to wreak havoc on the capitalist economies of the US, many countries of Europe like Italy and Spain and even some Islamic countries like Saudi Arabia and Iran!

While there is possibly no one who doesn’t know about Corona from the TV 24 X 7 views-channels, i wonder how many of you are familiar with the disease TB or Tuberculosis? Earlier generations heard much more about this disease, but only a few millennials may be familiar with a TB patient. Since the past few decades, despite its best efforts at providing free medicines, TB as per the Union Ministry of Health & Family Welfare documents continues to kill 4 to 5 lakh people every year. Or 1100 people every single day! Any medical treatise will also tell you that it is spread by the same respiratory route through breathing and coughing and spitting, and yet no one has ever been told to wear a mask or be locked down indoors!! The occasional ad in the newspapers or in the TV does keep reminding us how to access free treatment from the Government, but how come the media never tells us that a continuous rate of one million deaths every two years or more than 1 1 crore deaths in 2 decades means that THAT is also a pandemic for India and that it hasn’t been controlled despite the medicines and the vaccine available. And yet, no Government has ever bothered to enforce the Epidemic Disease Act – dug out from 1897 – or the newer Disaster Management Act against TB.

Think of it. Every morning for weeks, like automatons we have been switching on our mobile screens to update ourselves with the score of infected and deaths on CoViD-19 not unlike our craze to get the latest cricket score against the number of wickets! Why is it that CoViD threatens us but TB never did? Why is it that we never saw intense debates on a disease like TB which kills 15 lakh people every year worldwide and yet we never saw images of doctors and nurses fretting and fuming about it? Why is it that none of the celebrity doctors from the best five-star hospitals ever told you how to keep yourself safe from TB, but is ready to exhibit his just-out-of-OT dress and cap with a mask hanging by his chin to tell you about Corona?

It is because the social media and electronic media narrative doesn’t talk about the ‘other!’ On the other hand, it ‘other-ises’ who and what should be the main object of the narrative.

Corona scares us because it makes our class of people feel vulnerable. What was inherited and gained by way of a political economy structured to suit some classes and communities of people, we credited the success to our ability and smartness. We also dared to build our and our children’s dreams and future on this “success which we deserved while the others couldn’t because they didn’t try hard enough or were not good enough.” TB never scared us because we never heard about it amongst any of our friends and relatives! Its vaccine called ‘sufficient food’ was always there since times immemorial but as the deaths didn’t touch People Like Us, we never bothered to find a way to immunize those who year after year participate in the mass slow suicide of 4 to 5 lakh people every year by working for us at sub-human wages as working, walking skeletons!

It is we, who continue to get salaries irrespective of the fact that we may or may not work from home in the lockdown, who are happy with the lockdown and wish to extend it to whatever lengths. It is we who can afford to do so, because we don’t have to choose between dying from Corona or from hunger or TB. Our ilk can only die of Corona! Alas, we don’t understand that the sixty percent of India who is now without a job, labour or self-employment is fully aware that this lock down and social distancing will save her from Corona. But she is not ready to accept the lockdown because she knows that while Corona MAY strike her and her family, hunger WILL surely push her and her family to the frontline of the pandemic of TB deaths which may well swell to a million a year!

We will surely argue that we are paying our taxes and the Government is providing free food to the poor who have lost their livelihood due to the severe lockdown. At 5 kgs of rice per person and 1 kg of pulses per family in a month, this is not enough to meet even one third of the Calories and one-sixth of the protein requirements that are required for sedentary workers like us and will push them to the frontline of TB deaths in a few months! And pray what has this help specially announced in wake of the lockdown costed the Government? – a paltry ₹ 2000 crores extra for 68 crore rural people for 3 months that it claims to reach out to, when we KNOW how much would actually and finally reach them! And this, when children can’t even get the supplementary food they could have got through meals given out in Anganwadis and Schools. Instead of taking the lead in helping the poor people on who it has heaped the unplanned lockdown, it expects small businesses that were already floundering to feel morally obliged during this lockdown to continue paying salaries!!

The Government by its actions is also confirming that it doesn’t have the money to handle the epidemic, thus making the public nervous. In an action that surprised many, the Government which had all along appeared to be suspicious of NGOs, reached out to them to assist the district administrations in CoViD Relief. The PM started a Fund, PM Cares and while industrialists and celebrities queued up to donate money to it, what is apparent is that the Government is fearing the worst and is restricting its own spending, possibly to meet much worse exigencies that it foresees.

For those who will look for public health in this essay and see a political argument,  may do well to know that the social determinants of health are always amenable to good or bad politics. For example, to spend 24% of the annual budget on military and police while spending only 2.5% on public health measures is a political decision that makes us so vulnerable to public health emergencies. Similarly, responding to this Corona pandemic by listening to great clinicians instead of pubic health experts who understand rural distress and the social determinants of health is as much a political decision. Testing the members of one religious congregation and not the others’ meetings may also be political. Rudolf Virchow, the celebrated nineteenth century German physician wisely said, “Politics is nothing but medicine at a larger scale!”